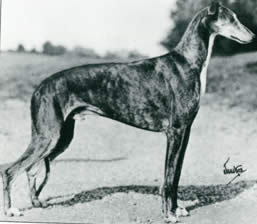 The Greyhound is the archtypical sighthound, it’s “type” is universally recognized all over the world. All other sighthound breeds, separate and distinct as they are, can be described relative to the Greyhound.

Since ancient times, sighthounds have coursed wild game for man, and for reasons lost in time, the Greyhound became the fastest breed of dog. Since the development of the Greyhound predates written texts and occurred in many geographical regions, we have no record of a specific purpose, place or people to tie it to, unlike the Borzoi and Whippet. 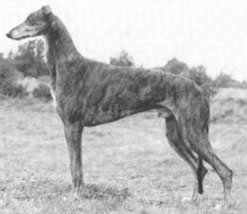 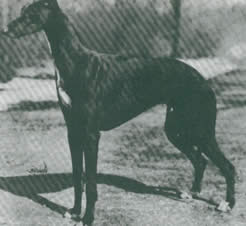 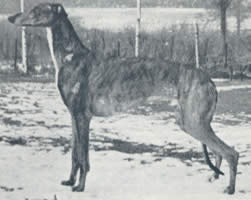 Greyhound Type is deep-chested, well muscled, stands over a lot of ground, has good, hard feet, and a long whip-like tail.

And above all else, Greyhound Type is FAST. Greyhound Type is made fast by the singular combination of skeletal structure, musculature, and the ability to focus completely on the object of the chase. Greyhound-type dogs evolved the double suspension gallop into its highest canine form in the Greyhound breed. 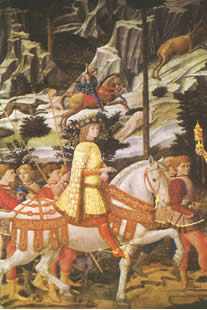 In medieval times they were hunted in packs numbering up to a hundred Greyhounds of different sizes in order to pursue whatever type game was put up that day. 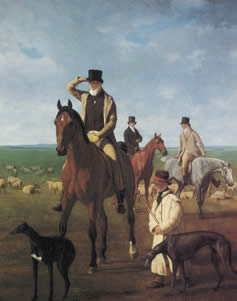 Varied game, varied terrain… These ancient artworks come from all over the civilized world, indicating the Greyhound was adaptable to a variety of terrain and climates. Most recently, the sport of coursing developed in England during the reign of Queen Elizabeth the First, and royal interest in this sport helped shape the modern Greyhound. Indeed, our AKC Greyhounds of today trace directly to imports from England.

Racing Greyhounds have only been bred for about one century, and are specialists at running full speed in a single direction. They have been selected for speed without regard for endurance or agility as track races are quite different from the changes in speed and direction needed when coursing live game over varied terrain. These differences in purpose have led to structural differences between modern show Greyhounds and the track dogs. Today, we are talking about Show Greyhounds. 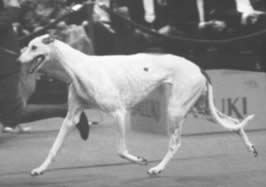 How does one describe a breed whose very type personifies a whole family of breeds? A description from the year 1486 gives perhaps the most concise statement of the fundamental essentials of the breed throughout history.

No mention of a desired color, or coat, or size, or weight. Those details were not important to a good Greyhound, but do make up a good portion of the differences between Greyhounds and other sighthound breeds. 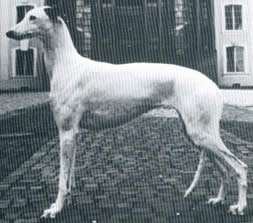 The coat is short, fine, and smooth with a satiny texture, and lies close to the skin. The tail is very long and tapering, carried low. It can be raised when excited but should not leave the body at an upward angle.

The weights stated in the AKC standard most closely fit the coursing dogs of the past two thousand years. Most modern Greyhounds are somewhat larger. The heights listed in the English standard are more representative of today’s show Greyhounds. Whether by height or weight, a Greyhound should not be so massive as to inhibit maximum functionality when coursing. 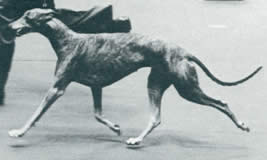 Movement smooth, effortless, straight, and close to the ground. The Greyhound is built for the double suspension gallop, so the fast show ring trot is not natural to him. He performs better at the collected trot. The gait should be smooth, effortless, and close to the ground without lowering his body. Greyhounds should keep their topline and shape when trotting. Heads are carried only slightly higher than the withers. A hackney gait is non-typical as is single tracking or “rope walking”, and should be faulted. 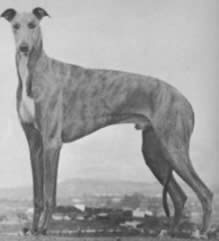 The Greyhound is a Type unto itself and should never be mistaken for any other breed.

In conclusion, it should be apparent that the Greyhound is a TYPE unto itself and should never be mistaken for any other breed.